1400s and Earlier - The Timucua Tribe in Lake County

The area of Lake County was some of the oldest inhabited land in Florida.    Even thousands of years ago the area's mild weather, excellent growing conditions, and abundance of fish and game, drew the Natives of the Timucuan Tribe to call this region their home.    Evidence of their presence has been found throughout Lake County. There are over one thousand identified archeological sites in Lake County.    In the 1880s, artifacts were discovered within Native American Mounds along Lake Emma in Villa City. 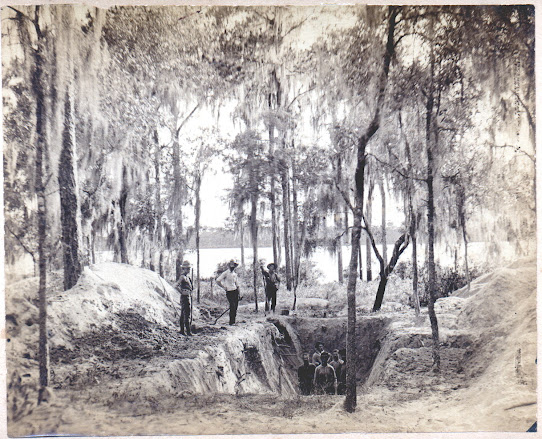 During trips to Florida in the late 1800s and early 1900s, Clarence Bloomfield Moore discovered and collected artifacts from the Timucuan Tribe in Villa City. He was an early expert in Native American archeology. Some of these artifacts made it into the Smithsonian Institute.

Paleo-Indigenous People of Florida and Artifacts

The Paleo-Indigenous peoples [1] [2] of Florida lived in the area for more than 12,000 years before the time of first contact with Europeans. However, the indigenous Floridians have largely died out with some having been completely gone by the early 1700s. Some migrated; some were taken to Cuba and Mexico by the Spanish, and a few may have been absorbed into what became the Seminole and Miccosukee tribes.

The first people arrived in Florida before the extinction of the Pleistocene megafauna (c. 9,700 BC). Human remains and artifacts have been found in association with the remains of Pleistocene animals at a number of Florida locations. A carved bone depicting a mammoth found near the site of the Vero Man (skeletal remains found at Vero Beach) has been dated to 11,000 BC - 18,000 BC.

Florida at the end of the Pleistocene was very different from what it is today. Due to the vast amount of water that was frozen in ice sheets during the last glacial period, the sea level was at least 330 feet lower than current levels. The area of Florida had almost twice as much land area and the water table was much lower. This is why some early Native American sites have been found under modern ocean waters. Artifacts have also been found at sites in flooded river valleys as much as 17 feet under the Gulf of Mexico. Additional suspected sites have been identified up to 20 miles offshore under 38 feet of water. The climate was also cooler and drier.
There were few rivers or springs in Florida. The few water sources that existed were in the interior of Florida where rain-fed lakes and water holes were located over relatively impervious deposits of marl soil, or deep sink holes partially filled by springs. Animals and humans would have congregated at these sparse water holes to drink. This concentration of animals would have also attracted the early Native American hunters. Many Paleo-indigenous artifacts and animal bones with butchering marks have been found in Florida rivers.

The Timucua Tribe of North and Central Florida

“They be all naked and of goodly stature, mighty, faire and as well shapen… as any people in all the worlde, very gentill, curtious and of good nature… the men be of tawny color, hawke nosed and of a pleasant countenance… the women be well favored and modest…”
— Jean Ribault, French Explorer (1560s)

Much of what we know about early Timucuan culture comes not from the Spanish, but from the French.
In 1564, French Huguenots, that were seeking refuge from religious persecution in France, founded Fort Caroline along the St. Johns River, in present-day Jacksonville. After an initial conflict, the Huguenots were able to establish friendly relations with the local Timicua in the area.
The sketches and notes made by Jaques le Moyne, one of the French settlers, are one of the few primary resources about the Timicua.

The Timucua were the Native American people living in the Northeast and North Central portions of Florida, including what would become Lake County.
Their name may have been derived from the Spanish pronunciation of the Timucuan word atimoqua, which means “lord” or “chief.”
The Timucua probably numbered between 200,000 and 300,000 people that were organized into various chiefdoms, which all spoke a common language.
The earliest evidence of their presence in Florida dates to around 3000 BC.

Farming Methods of The Timucua

They were semi-nomadic, so during the mild Fall and Winter months, the Timucua lived in the inland forests. They planted maize, beans, squash, melons, and various root vegetables as part of their diet. They employed a “slash and burn” style of farming. Trees would be cut then the fields would be cleared with fire. The soil would be toiled thus mixing in the nitrates from the wood ash, which makes an effective fertilizer. They would also collect wild fruits and berries, cultivate tobacco, and bake bread made from the root starch of the koonti plant, which is a type of low growing palm. The Timicua were known to utilize a communal food storage system, which suggests crop surpluses were common.


Timucuans hunted game, including deer, alligator, bear, turkey, and possibly even eastern bison.
Many would migrate to the cooler seashores during the hot summers. Here they would fish and collect oysters and shellfish. The evidence of their culture still exists today in the many piles of discarded shells, known as shell middens, still found around Florida’s coastal areas.

Fate of the Timucua


By the late 1700s, it is thought that all of the indigenous Indians of Florida were gone.
The Seminole tribe was not included in the list above, since they did not exist as a unique tribe until the early 1700s.