Monte Vista was a town located South of HWY 50 between Sumner Lake, Groveland (then Taylorville) and Lake Minnehaha, Clermont.

Around 1874, the family of James and Lavina Lee arrived in the area of Monte Vista from South Carolina. They homesteaded on 160 acres. James was the brother of Jesse Lee who had already come to Monte Vista or Carter's Island around 1871. James was a medic during the War of Northern Agression (Civil War). Since there were no doctors in Empire, James offered medical help to the locals. James Lee became well known for his citrus trees.
Milton Lee, one of their six children, married Idaho Swain, the granddaughter of Joel Swain, who was the first pastor of Empire Church.
James and Lavina's other son, Joseph, continued to live in the family's log cabin home. Joseph daughter, Cyleta Lee Austin, also lived in the family home, which still stands in Monte Vista, as did her daughters. While the home's exterior has been remodeled over the years, the interior remains the same. Much of the original acreage is still used as today as a working 148-year-old farm, raising primarily cattle and hay.
Cyleta Austin went on to became Groveland's historian emeritus and was a source for much of the information that you will find on our website and in our museum.

Monte Vista had its own schoolhouse. The teacher commuted to the school by boat through the Chain-O-Lakes. 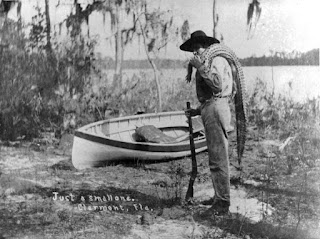 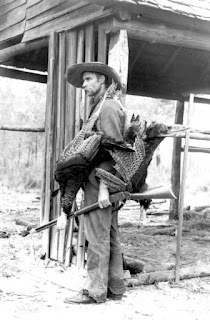 The early history of the town really began in 1888 with the arrival of Hattie Daggett. 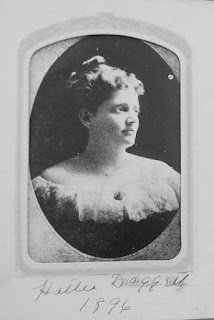 
Hattie eventually built what became known as the Log House (Log House Road) on 27 acres overlooking Lake Crescent, in present day Clermont.
Hattie's plan was to build a home for her and her parents to visit in the winter months.
While Hattie remained in Philidelphia working as a nurse to famous doctors, she hired her brother, James A. Daggett, as master builder to build the house, while she continued to work. 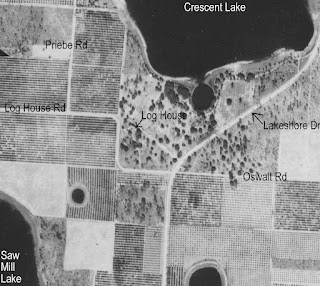 Location of the Log House south of Crescent Lake.


Construction began in 1896. The logs from the house were chosen and brought to the location from the many surrounding virgin forests. Most of the log work was done by Thomas Locke, Doc Driggers, and Jesse Breedlove. One side of each log was scored with a broad ax. A sawmill was moved from Mascotte to size the logs down to 5 inches in thickness and whatever the depth the solid heart would square.. The house was constructed using 7/8 inch iron rods running through the logs from top to bottom of each story with additional 4x4s bolted in to support the walls. Between the joists, from side to side, were truss rods with turnbuckles on each side of each window. The logs were lifted and placed by hand. James Felter, at his mill on Felter's Lake, made the 47,000 twenty-inch shingles, from Lake Louisa cypress, that were used for the roof and gables. These were used until they were covered with Belgian shingles 34 years later. Felter also furnished the solid heart pine flooring for the house at $16 per thousand boards delivered. The floor boards were one and a half inches thick, matched and beaded.
When completed in 1906, the masterpiece of a house had a frontage of 75 feet. 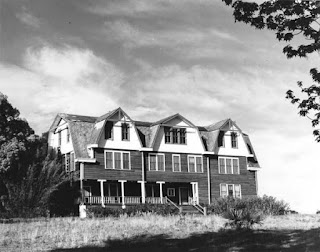 
It was a fulfillment of Hattie's long time wish of having a rambling old fashioned log house with a big fireplace. 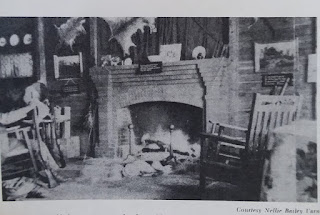 However, the wish was not completed as expected. While the ground floor was built according to her plan, to Hattie's disappointment, James changed the plans for the rest of the house. What was supposed to be a one and a half story cabin with part of the roof to be fitted for windows in the ustairs bedrooms, became a three story lodge with a different style roof.
Ms. Daggett eventually left Philadelphia and moved into the Log House as a permanent Monte Vista resident where she operated it as a lodge.
Later in 1901, she married Capt. Robert Millholland and he came to live with her at the lodge.
Hattie was also influential in the digging of the Monte Vista Canal, which connected Lake Crescent to Lake Minnehaha.

Around this time, Mr. and Mrs. Millholland began using the lodge to host visitors and potential land buyers in the area.
One such guest, Stuart Bowman, described Hattie as, “a charming and attractive lady” who he felt could “be entirely at home in any drawing room or social group.”
It was Hattie who actually “called my attention to a tract of approximately 14,000 acres,” which Bowman eventually purchased. 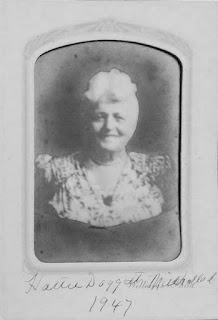 After the deaths of Hattie and Robert, the Log House was purchased by James M. Harris, of Tulsa Oklahoma, for use as a sanitorium for a brief time.
It was also used as a dance hall, owned by the Clermont Fruit and Land company.
It was later purchase by Fred W. Brown to be used as a private residence.
During WWII it was leased by Fred W. Brown to the Army Signal Corps Ground Signal Services for radar experimental work. They had a staff of 75 and hired many civilian employees, including 15 or 20 local guards. Several sheet metal buildings were built and The Log House was revamped to suit their purposes. The base closed in 1946.
It was then purchased by Leonard Baird who used the government metal buildings for a poultry business.
It was finally purchased by a Mr. and Mrs. O. J. Priebe (Priebe Rd.) in 1958. It suffered a fire in 1959 and the Preibe's had it demolished and turned the property into the Crestview Subdivision, one of Clermont's first subdivisions.


Next Article: 1870s - The Turpentine Industry Comes to South Lake