The process of making turpentine began in America as far back as the Colonial Era. Turpentine was extremely important for the wooden shipping vessels, so the term "naval stores" began to be used to refer to the creation and selling of turpentine, rosin, tar, pitch, and other such products. These products were used to preserve the wood and ropes of the ships, as well as waterproofing of the vessels.

Turpentine was also used for medicines, cleaning products, and painting.

Turpentine and Rosin are both created from the sap of pine trees.
The process begins when a tree is selected and scoured with marks known as chevrons. This causes the tree to "bleed out" as the sap flows from these cuts in order to help heal the tree.
Metal sleeves are then inserted into the tree beneath the chevron cuts in order to direct the sap into a terra cotta pot that is nailed to the tree.
After enough time has passed to allow enough sap to collect in the pot, the sap is poured into wooden barrels, which are loaded onto wagons and transported to the nearest still. 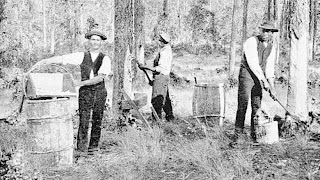 From March to October, one tree could yield eight or nine quarts of sap. 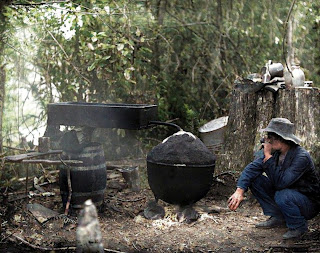 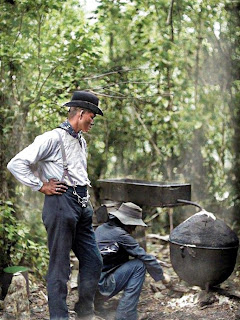 At the still, the sap is poured into a large metal "pot" and boiled. This "refining" process causes the liquid turpentine to separate from the solid waxy rosin. Both are collected and then sent to the local Naval Store.
Over time, the cuts would damage the tree to the point where it would no longer produce sap. At this point, the harvesters would move on to a new area and leave the trees to be cut down and sent to the local sawmill to be used for lumber.
This is why many stills would have a sawmill in the area. The Arnold Sawmill of Groveland became the largest sawmill in the Southeast United States.

Following the end of the War of Northern Agression (Civil War), the turpentine industry began to reshape the economy of the South. With the fall of the great agricultural plantations, the South had to turn to other means. The processing of pine sap in backwood stills became one of Florida's major industries in the late 1800s and early 1900s.
The industry also provided much needed jobs for the hundreds of thousands of former Southern slaves, who were left without a home or any means of income, as a result of the Emancipation Proclamation.
Many of the owners of the stills, brought crews of these former slaves with them to Florida, where together they began to carve out a new life. The owners would build homes for the workers and a commissary that would be stocked with food and other supplies.
The Watson Camp in Eva, south of Groveland, was known to have a commissary and about 40 homes for the workers.
Groveland's E. E. Edge, would eventually create communities, like Stuckey, for the workers to be able to purchase land and build their own homes.

It is beleived that, in the 1880s, Florida had 23 million acres of pine trees.
Still all a part of Sumter County at the time, the area of Clermont to Brookesville was thick with long-leaf yellow pine. This particular type of pine was sought after, not only for its sap, but also for its lumber, since the species was highly resistant to insects. This feature made it highly valuable for the construction of homes and other structures.
Many Florida communities and towns formed around these early turpentine stills or camps. Taylorville (early Groveland), Mascotte, Stuckey, and Bay Root (now Bay Lake) are all examples of such. Another turpentine camp was built by E. E. Edge and located near the Lake Emma area.