1922 - The First Baptist Church of Groveland Is Formed

In 1922, A. A. Holmes held a series of evangelistic meetings that led to 22 men and 21 women coming together to form the congregation of the First Baptist Church of Groveland. A. A. Holmes became the first Pastor with his first service in March of 1922. 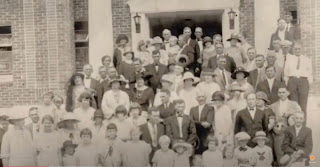 In 1924, several members left the church to form a new Baptist church.

Rev. Harold Link served from August 1930 to October 1934. He resigned after suffering a nervous breakdown.

Dr. W. A. Hamlet served from December 1936 to December 1940. He moved to pastor at First Baptist Church in Tavares.

Rev. W. J. McCauley served for five months in 1941. He left before the onset of WW II

The church building was partially destroyed by fire and services were held in the school auditorium.

Rev. B. C. McWhorter served until he was enlisted by the US Army to be a Chaplin.

Rev. Hugh Pyle brought back stability by serving from October 1943 to October 1946.

He did great things for the church and helped to enlarge the church program. An educational building was built. Air Conditioning was installed in the sanctuary and the Auditorium was remodeled. New rugs were purchased for the floors. The grounds were landscaped and an underground irrigation system was installed.
Rev. Cooper resigned in November 1956 and moved to Hialeah, FL, where he continued to preach.

Rev. A. A. Stulk replaced Rev. Cooper for a short while.

Then Rev. Cooper returned as pastor in 1958. He rallied the congregation to purchase surrounding lots and expand the church. The church purchased land from Simson and Puryear in 1958. In April of 1959, they also purchased the Mann property. Rev. Cooper resigned again in November 08, 1959. He would continue to live in Groveland and preach at Groveland First Baptist and other surrounding churches.

Rev. O. D. Moore served from April 1960 to October 1961 when he moved to Liberty Baptist Church in Appomattox, VA.


Next Article: 1923 - L. D. Edge Becomes the Youngest Speaker of the House of Florida