1909 - History of the Methodist Church

The history of churches in Taylorville began in 1904 when six families cleared land in what was then called Taylorville to build the first church. Known as the Union Church, it was located near today's Greenwood Cemetery.
Several faiths, including Methodists, worshipped at the Union Church in alternating services for 15 years.

1909 - History of the Methodist Church

The First Methodist Church in Groveland was founded in November of 1909. 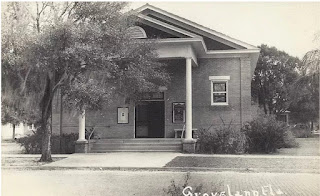 In 1920, John W. Beach donated land where a new church building was constructed. It is the site of the present day church.
A two-story parsonage was constructed next door.
1927 - First Methodist Church, South (as it was called then), is dedicated.
1928 - Sunday Schol classroomsalong with a dining room and kitchen were built next to the church.

At E.E. Edge's death in 1934, being one of nine charter members of the First Methodist Church in Groveland, the church voted unanimously to change the name to the Edge Memorial Methodist Church in honor of his support of the church and Methodist-supported missions, including Florida Southern College.
Constructed in 1922, the second oldest building on the campus of Florida Southern College in Lakeland, Florida, was renamed Edge Hall in 1935 to honor E. E. Edge, who was one of the first large donors to the college.
Edge, and his son Lacy Day Edge, were lifelong members of the church and were also successful business leaders.

1950 - The Hill Building social hall was built with a legacy gift left by William Hill, a longtime Men's Bible Class teacher.
1958 - A new education building was dedicated.
1966 - A newly remodeled sanctuary was dedicated.
1968 - A new parsonage on Waldo Street was built.
1978 - Mrs. Annie Sampey Carter, the last surviving charter member, passed away.
1980 - The church's stained glass windows were restored and installed in the church bays.
1982 - The church assumed ownership and responsibility for Greenwood Cemetery.
1991 - The Methodist church joined the Baptist, Lutheran and Groveland Free Church in the first Main Avenue Christmas Stroll.
1998 - Rev. Jennifer Stiles-Williams was appointed as the first female minister to serve the church.
2000 - A contemporary service debuts and the parsonage is renovated.
2009 - The church celebrates its centennial with a variety of activities and services. Marie Roberts organized a memorabilia display.