The winter of 1894 brought big changes to Villa City. With its agriculture flourishing, the residents prepared for a typical Florida winter of occasional cold snaps and mild freezes, which helped sweeten the fruit and kill the pests in the groves.
What happened in the evening of Decemver 29, 1894 took them all by surprise. The temperatures dropped into the teens and stayed there all night.
In the week following, the trees became stripped of their leaves. However, the damage was not bad enough to kill the trees.
In January, the temperatures rose back into the 70s and 80s for most of the month. The trees began to fill with sap when spring seemed to be at hand.

Then, on February 7, 1895, a massive "arctic express" from the north interrupted the warm humid weather. The air quickly dipped down to a freezing 12 degrees. The freezing temperatures started early in the day before the rain clouds had cleared, thus causing snow to fall quite hard and accumulate to depths of up to a quarter of an inch.
The temperatures dropped into the low teens at sunset and remained there all night, solidly freezing the sap in the trees.

This event in itself might not have been as disastrous as it seemed and spared the hardier trees, if they could have warmed slowly the next day. However, when the morning came with a bright sunshine, the temperature quickly rose up to 85 degrees and warmed the trees. The rapid thaw of the frozen sap caused the trunks of the trees to burst wide open with loud explosions.

Almost all of the citrus trees in the entire state were destroyed, as well as the vegetable crops and many farm animals. The devastation was agonizing to look upon. Ten years of hard labor were gone in a single day.
Villa City quckly became one of Florida's many ghost towns. Within a year, the population dropped from about 150 to only a few. Some of its citizens returned to the North to remake their fortunes and others moved closer to nearby settlements. The King family, with the exception of, Anne Parlow, George King's mother-in-law, picked up their things and moved back to Boston and New Bedford. Those few who were determined enough to stay in Villa City survived mostly on wild game, fish, and their own gardens. The experience encouraged what were already tight knit communities to continue to turn to each other for support.
The abandoned property of those who left to the North, were eventually seized by the state for delinquent taxes and the local people moved into the vacant houses. They took possession of the abandoned contents and eventually disassembled the houses and the lumber was repurposed for other homes and buildings in the area.
The last remaining building was the Gano house, a popular site for high school couples into the 1960s. It was torn down in 1968, making Villa City a true ghost town. 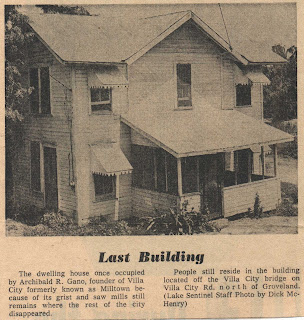 Since the long leaf pine trees were not affected by the freeze, turpentine production became popular until the agricultural climate improved.
This is a turpentine still built on the shore of Lake Emma.