In 1850, Petrovitch Demenscheff, was born in Russia, to Russian nobility. 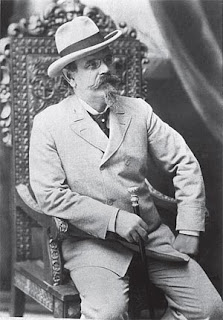 Being an outspoken anti-Marxist, he was exiled and immigrated to America in either 1880 or 1881. He sailed to New York with $3,000 and an English language textbook.
Upon landing in New York, he anglicized his name to Peter Demens and left straight for his cousin's orange grove in Jacksonville, Florida. With the land there being too expensive, he traveled further along to Longwood.

In 1885, having received training, in Russia, as a forester managing his large family estates, Demens began a business supplying railroad ties to the construction of the Orange Belt Railway.
The Orange Belt Railway was being built to connect the citrus groves in Sanford to the ports near what would become St. Petersburg. This was during the era when Florida's frontier was beginning to see the arrival of the three-foot narrow gauge railroads.

1886 - Rail Lines in Sumter (Lake) County prior to the Orange Belt Railway. Notice the closest place names to the Groveland area were Millford (later Villa City) and Empire. 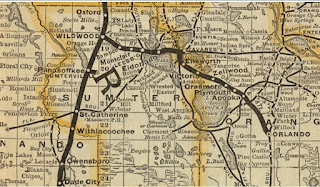 Demens became owner of the Orange Belt Railway System when the previous owners fell into dept and could not pay him the money they owed him. Under Peter's ownership, the rail lines were extended to connect Jacksonville and Kissimmee to Tampa.
The Orange Belt Railway began in Sanford and, by 1887, came through the area that would become Taylorville.

The local family of Matthew Sloan recalls how he was paid 25 cents a day for shoveling dirt in order to clear a right of way for the tracks.

The railway continued on its journey, heading West through Mascotte and Slone Ridge, parallel to today's HWY 50, with its construction ending up in what would become St. Petersburg.
On June 8, 1888 the first train pulled into the terminus (the end of the line) in southern Pinellas County with one passenger. The area of this train station had no official name and no real streets or sidewalks. Demens drew straws with John Constantine Williams Sr. for naming rights. Demens won and named the location St. Petersburg, Florida, after St. Petersburg, Russia, where he had spent half his youth. Williams had wanted to name it Detroit, which was given to the first hotel in the city.


With its wood burning engine, the trains ran on narrow gauge tracks.
Small towns began to appear along the railroad, including Taylorville.
The first train depot in Taylorville was located between today's Billy's Meat Market and the city's Festival Park.
The arrival of the Sanford & St. Petersburg line of the Orange Belt Railroad brought many more settlers to the Groveland area.

In 1889, the railway now having put Demens into debt, like the previous owners, he sold the railroad to Henry B. Plant. Plant was also the owner of the city of Mascotte's namesake, the SS Mascotte.

In 1890, the rail system eventually converted to standard gauge when it merged with the Atlantic Coast Line.
Over time the railroad helped change Groveland into a thriving town.
The trains hauled out lumber, citrus, watermelons, and farm produce and brought in investors and farmers from the North. Lumber and pine tree sap used to make turpentine for ship building, along with agriculture industries continued to contribute to Groveland's economic growth.

Writings of the area's old-timers recounts the time of the early railroad:

"When the train came through, it had a green pine pole for a coupling and at one timehad a barrel for a smoke stack. They would heat by wood and there were a few instances when they stopped the train and the crew got off and cut enough wood to make steam to get to the next wood stack. They used wood two feet long to fire the boilers."
"On one occasion, the train pulled into Mascotte and the engineer was sick. Mr. Rabb, who had come to live in Mascotte in the 1890s, and a retired engineer, got on the train and drove it on to St. Petersburg."

A few years after the trains came through the area, the railroad company began running excursions to St. Petersburg on Saturday nights, with a return trip on Monday. The price for a ticket was 75 cents for the round trip.

A man named Jake Varn lived in the area of today's Green Valley Country Club. At some point before 1887, Varn mad a deal with the railroad company that, if he would provide them with 30 feet of right of way, they would build him a depot and make it a regular stop. The area would become known as Varnell. The "town" of Varnell has been found on maps as early as 1895, but having never developed, by 1917, it disappeared from maps along with the depot.

There were many stops along the way from Sanford to St. Petersburg. Several of these were nothing more than a place for the trains to refuel by collecting water and chopping wood for the boilers.
While some of these would go on to form communities or towns, many simply disappeared around the turn of the century. One such stop was known as Sheridan. It was located on the area of today's Groveland Publix.

In 1925, the second depot in Groveland, which remains today by the northwest corner of HWY 50 and HWY 19, was built of brick to replace the earlier smaller depot.

Around 1930, Mascotte constructed a pass over the railroad, on C.R. North 33.
Local resident Daisy (Hart) Brown recalled, as a young girl, watching from the schoolyard as the small trucks would have to make a running start, in reverse, just to get to the top of the steep overpass, in order to unload the dirt. The overpass was later leveled.

The B and W Canning Plant would eventually take over Groveland's Depot and used it as part of their gated entrance, as the main track ran along the front of the factory with other tracks leading to the area for loading the juice and other products that they shipped across the country.

Eventually, on July 1, 1967, the Atlantic Coastline and the Seaboard Air Line would merge to form the Seaboard Coastline Railroad. In 1971, it would be taken over by Amtrak.

By 1984, what remained of the train tracks through Groveland and Mascotte had all been removed. However, signs of these tracks can still be seen in some areas today.
The Mascotte Depot was moved to the Lake County Fair Grounds, where it still stands today.
The path of the train tracks that ran under the C. R. North 33 overpass became today's Underpass Road. Before recent development in 2021, you could still see remnents of the pit from where they quarried the sand for the overpass.