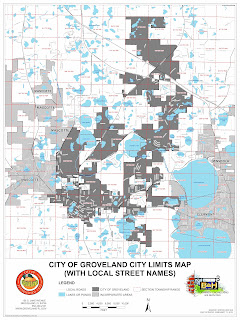 Around 2010, numerous developers began pushing for annexations that totaled 650 acres, bringing the largest decade incremental growth of the city limits.
This causes the size of Groveland to more than double in less than ten years.
A massive population increase brings the city's population from 2,300 in 2000, to 8,729 citizens by 2010.
This time marks the end of the small rural town and the strong relationships among the residents.

Chris Ford Commerce Park located in the close proximity to the FL Turnpike, begins development of several distribution centers and is annexed into the Groveland city limits.

In 2017 the City of Groveland annex's the largest single annexation of 2,500 acres encompassing Villa City.
The Villa City development is the largest proposed development ever within the Lake County boundary, and will include more than 7,500 mixed use residential dwellings

By 2020, Groveland has become the second fastest growing city in the state of Florida (The Villages is number one).
The population has more than doubled to 18,000 residents and city limits increased to more than 26 square miles.