The world has had a long tradition of slavery and it was continued in Colonial America. Many of the early arrivers to America, both whites and blacks, came here under the rule of indentured servitude. While this was a way for many Europeans to pay for their passage to the New World, many Africans were kidnapped by or sold by other Africans to the Spanish slave traders. On reaching America, they were then sold to either white or black slave owners. During this time the terms "servent" and "slave" were generally used interchangeably.
In 1653, John Casor, an African indentured servent, claimed that he had fulfilled his contract many years earlier, but his owner, Anthony Johnson was refusing to release him. Anthony Johnson was himself a former indentured servent who had been kidnapped from his home of Angola, Africa, but had been released from his contract and became a very successful land owner and tobacco farmer. Despite all of the evidence in favor of Casor, including the contract, the court ruled in favor of Johnson. The court forced Casor into lifelong slavery. It was the first case of forced lifelong slavery in America that was not the result of criminal punishment. In 1662, more laws began to appear distinguishing black servants and slaves from white servents.

Many of the early poor and indentured Europeans lived in harmony amongst the indentured, enslaved, and free Africans as relative equals. However, there began to be revolt between this blended group and the wealthy and political "elite" Europeans. This was in large part due to the black and white farmers of Virginia wanting to wipe out the local Native American population and take their lands, while the elite wanted to preserve those Natives who were under their control. This rose to a head in 1676 when Nathaniel Bacon led a mixed group of whites and blacks in a rebellion against William Berkeley, the Colonel Governor of Virginia.
In response, the ruling elite began to enact laws to give the appearence that the white colonists and servents held more rights than the blacks. This caused a divide between these two once friendly groups, so attention was taken away from their shared anger towards the elite, as they began to turn against each other.

By 1776, about 100 years after the slave laws began in America, the newly forming nation had seen a drastic decline in the slave trade. Most had assumed that the practice would die out on its own.
However, Eli Whitney's invention of the cotton gin, in 1793, changed all that. Prior to that, the task of removing the seeds from the balls of cotton was a time consuming task, which made the farming of cotton on plantations unprofitable. The cotton gin created a leap forward in the process, thus cotton plantations began to spring up all over the fertile South. This caused a massive need for the cheap labor of slaves. 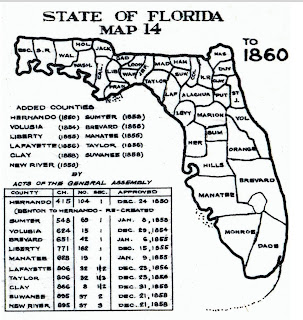 By 1860, after receiveing statehood just 15 years earlier, the population of Florida had swelled from around 8,000 to around 140,000. When the Civil War started in 1861, there were some large plantations, but the majority of settlers in Lake County operated small farms, so most relied on their children to help work the family farm.

Trouble had been brewing between the North and the South for several years, as the industrialized Northern states had been pushing for laws of commerce that benefitted the North at the detriment to the Southern states. These laws often moved the wealth from the South to the North through heavy taxes and tariffs on the export of agricultural products. The South saw the push for abolishment of slavery as one more step in this direction.

In November of 1860, with the election of Abraham Lincoln, the first President of the newly established Republican party, came threats of the abolishment of slavery. Many Southerners feared the abolishment of slavery would cause an economic collapse, as well as the suddenly massive amount of homeless and jobless of slaves having to resort to theft to survive. Lincoln's upcoming appointment was the last straw.
On December 20, 1860, South Carolina adopted a declaration of secession.
On January 10th, 1861, following the examples of South Carolina and Mississippi, Florida became the third state to secede from the Union and declare itself to be an independent and sovreign nation.
On February 8th, 1861, Florida joined the newly established nation known as the Confederate States of America. The Confederacy created a new Constitution, which was mostly identical, except for changes that increased state's rights, decreased federal government spending and its control over state commerce, as well as protect the rights of slave owners.

President Lincoln refused to acknowledge South Carolina's ability to secede from the Union. This caused tensions at Fort Sumter, as Lincoln refused to order the Union troops to leave.
On April 6th, Lincoln sent word that he was sending a ship to resupply the fort.
On April 12th, Condeferate forces decided to attack the fort before the supply ship could arrive. Their ultimate capture of the fort led Lincoln to proclaim war against the Confederacy.
There are many different names for the war. In the South, it has long been called "The War of Northern Agression" as it was seen as an act of revenge for the South's secession. Lincoln himself often stated that he would have allowed slavery to continue if he thought it would keep the Union together.
It has also been referred to as The Civil War. However, this is not acurate, since the definition of a civil war is one fought between citizens of the same country. Since the South had already formed the Confederacy prior to the start of the war, the term does not acurately apply. The term has continued due to the North refusing to acknowledge the secession of the Southern states.


On February 8th, 1861, Florida joined the newly established nation known as the Confederate States of America.
The Statute of April 1862 forced most white males between the ages of 18 and 35 into involuntary service to the Confederacy. By September of that year, the age limit was increased to 45 and soon lowered to allow for 17 year old boys.
This left only women and their slaves to run the few plantations or young children to run the many small farms.
Even at that, Lake County has able to provide beef and other provisions to the army.

In 1851, William W. Slone, the son of Georgia State Senator William Slone (b. 1787), migrated to the area west of Groveland.
During the war, he became a Confederate Captain. The area of Slone's Ridge was later named after him.
William W. Slone's 1st cousin, Daniel Sloan, later came to this area in 1866. It is believed at that time, the house of Daniel Sloan was possibly the first built in the area that would become Taylorville.
Daniel was a circuit riding Baptist preacher and farmer. He was also a 1st Leutinent in Florida's Cow Cavalry in the Confederate Army. The Cow Cavalry was responsible for escorting thousands of head of cattle northward to feed the Confederate troops. He is buried at Dukes Cemetery in Groveland.


Cattle was not the only food source important for the war effort. The farms of Florida were highly protected from Union troops that may have attempted to invade the coast and make their way inland to destroy the crops before they could be sent to the soldiers. The families remaining at home sacrificed and "went without" to allow more food to be sent to their husbands and sons that were enlisted.

On January 1st, 1863, fearing a rallying of the Confederate forces, President Lincoln issued the Emancipation Proclamation, which freed all slaves living in the states of rebellion against the Union, but not Northern or border states, nor Western territories. These states that had not already outlawed slavery were still legally able to keep there slaves.
Many people believe that the emancipation proclamation effectively ended slavery, but the truth is far more complicated than that.
It did cause slavery to become a leading issue of the war, which led to the South losing support from France and England, which were the only countries that had outlawed slavery at that time. Ironically, these countries refused support to the South, yet continued support for the Union, who were still practicing slavery. This lack of support and supplies would greatly weaken the Southern forces.
While the proclamation did little to actually free slaves in the Southern states, what it did accomplish was allowing the Union to capture the slaves in the areas it conquered, free them, then recruit them for military service. The Union soon had 200,000 former slaves serving in its military.
Even the majority of Northerners at the time did not support the immediate freeing of slaves, as they feared a mass immigration of these now free blacks into their towns. Most abolishinists, including Lincoln, had planned for a gradual end to slavery. Since Lincoln did not have the support, he had to issue it under his war time powers. As a result, it would no longer be a legal document as soon as the war ended. Because of this, the 13th amendment was quickly passed as the war was ending in 1865.

Begiining in April of 1865, groups of Confederate forces started to surrender. The end of the war was finally proclaimed in August of 1866.

By 1865 and the end of the war, another homesteading act was in place, again offering 160 acres of land to settlers who would live on the land for five years and improve it. Veteren Soldiers, both Rebel and Yankee were eager to get on with their lives. The attractive Homesteading Act offered a fresh start and many men took advantage of the opportunity and came to Lake County to make their homes.